The government dithered and denied the pandemic’s severity. Now, a health disaster looms.

KABUL, Afghanistan—After the Afghan government dithered for months last year over how to respond to the emerging pandemic, the country is now in the midst of its third COVID-19 wave, with the authorities still in deep denial about the severity of the disease. Its figures are widely derided, with numbers of deaths and infections believed to be much higher than reported.

Figures reported by the Afghan Ministry of Public Health show the number of positive cases on the rise: 1,582 new cases on Monday, with 56 reported deaths, up from 1,379 new cases on Sunday. A health economist, who did not wish to be identified, said the true figure was likely as much as double that released by the ministry. The MoPH said a total of 80,615 people have been infected with the coronavirus since the first case was reported on Feb. 11, 2020; 3,195 people have died, it said.

However, health professionals said few Afghans report their illness to hospitals, and many who have fallen ill have died in their homes, suggesting official COVID-19 numbers in Afghanistan belie the gravity and widespread nature of the continuing outbreak. On a day last week when 36 deaths were officially reported nationwide, a doctor at a Kabul public hospital, who did not wish to be named, estimated deaths in the capital alone at more than 500 deaths per day.

The government argued Kabul’s cemeteries have not reached capacity, proving deaths from COVID-19 are minimal. But most Kabul residents are returned to their villages for burial, where high attendance at funerals is a show of status (and an additional disease vector) and which further clouds confidence in government figures.

“The problem is that no one can prove [government information] right or wrong,” said Ahmad Abid Humayun, executive director of Sanayee Development Organization.

Even as the cabinet considers returning to a nationwide lockdown, with schools and universities already back to online teaching as infection figures climb, the government has ignored pleas from nongovernmental organizations to ban travel to and from Iran and Pakistan, both countries with high infection rates and porous borders. Flights into Kabul from India, which has become the disease’s epicenter, are full as Afghans flee home, a senior official said. Negative COVID-19 tests are said to be easily purchased for around $45. 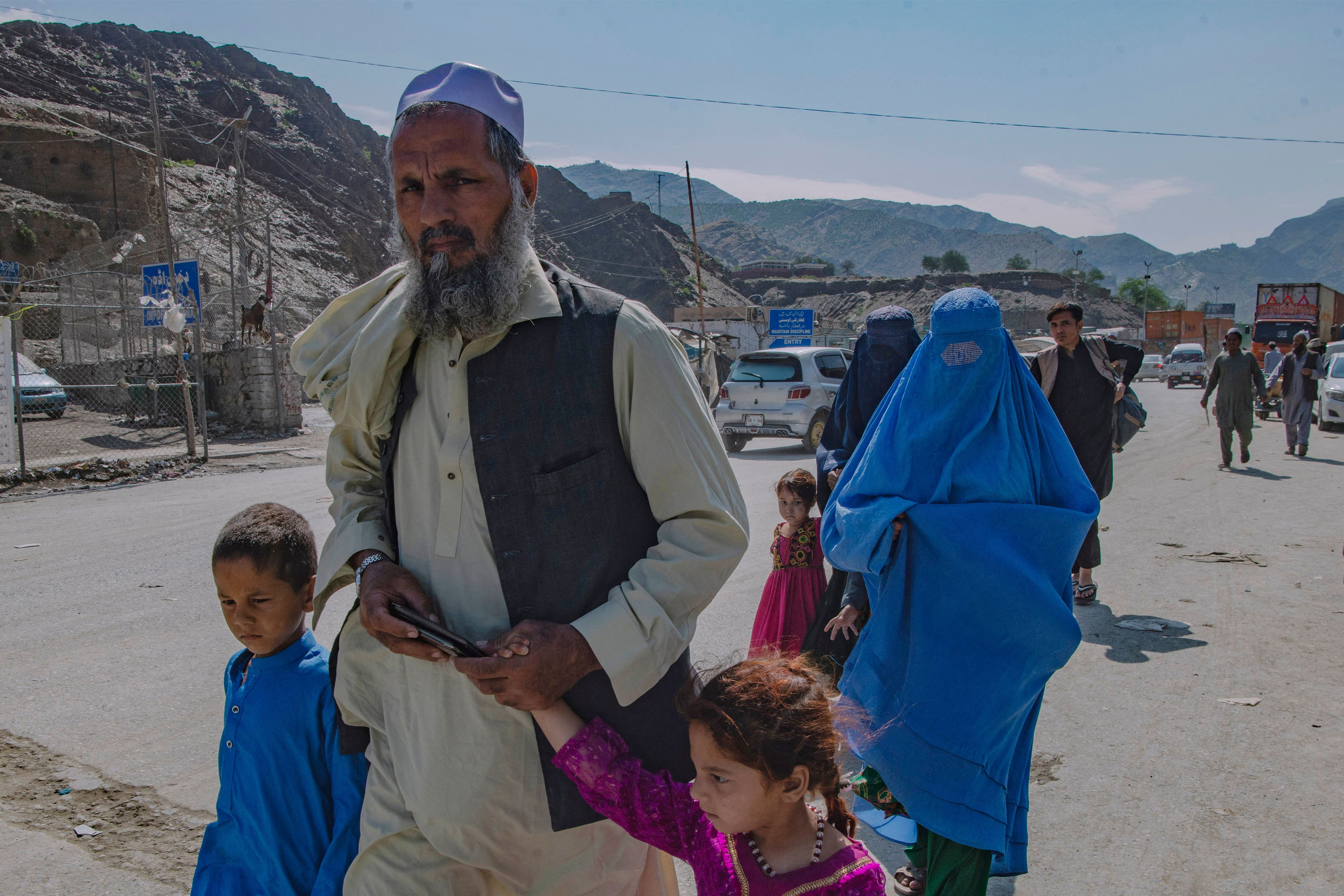 Afghan nationals make their way across the Pakistan-Afghanistan border to Torkham, Afghanistan from Peshawar, Pakistan, on May 5.ABDUL MAJEED/AFP VIA GETTY IMAGES

The entrenched nature of COVID-19 in Afghanistan owes a lot to the mistakes made during the first three months of the outbreak last year, after which medical authorities decided to entrust the response to international and local charities. By then, it was too late to reverse the pandemic’s spread, according to front-line health care workers. And those early miscues were compounded by corruption and profiteering that has seen prices for basic health equipment soar while ventilators ordered from abroad disappear before reaching the hospitals that desperately need them. The government has failed to address allegations that funds for COVID-19 have been embezzled or misspent as public anger grows over the government’s inability to curb the virus’s spread and cut deaths.

“The government says it has spent $200 million on fighting COVID, but there is no adequate public information campaign, so no one knows how or where to get vaccinated,” said a Kabul businessperson. “No doubt a lot of that money has gone into the deep, deep pockets of officials.”

Afghanistan’s efforts to deal with the public health crisis are hampered not only by endemic corruption and mistrust of the government but also the rapid drawdown of U.S. and international military forces that have helped Afghan security forces fight insurgents for almost 20 years. The Taliban, fighting to dislodge Afghan President Ashraf Ghani’s administration, are holding sizable territory amid a nationwide spike in violence. Embassies are reducing staff, recommending their nationals leave the country, or are even closing, as the Australians did late last month. 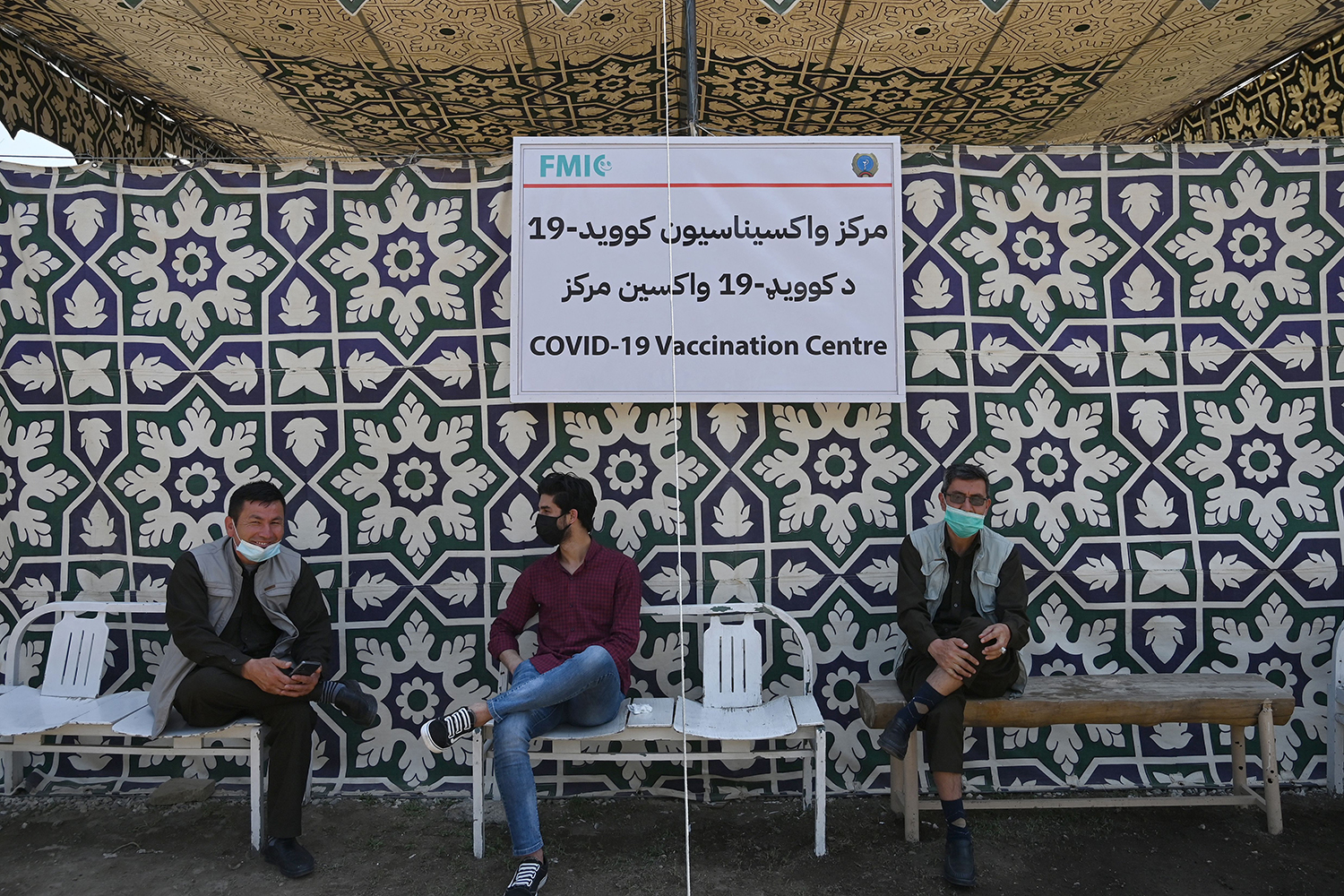 Men wait to receive a dose of the Covishield vaccine against COVID-19 at a vaccination center in Kabul, Afghanistan, on April 26. WAKIL KOHSAR/AFP VIA GETTY IMAGES

And then there’s all the harm done by rumor, superstition, and misinformation spread by religious leaders, Humayun said. In the absence of public information campaigns, vaccine awareness and acceptance are low, with millions of doses expiring before they can be used. Health workers implore their friends and associates to be vaccinated. Some, like Sanayee, visit people in their homes and ask them to invite relatives, friends, and staff to be vaccinated together to use the vaccines before they expire.

A now-entrenched belief that contracting COVID-19 causes infertility means people who test positive refuse to cooperate in test-and-trace programs. “They just disappear, refuse to answer the phone,” Humayun said, whose organization delivers health care to Kabul, Zabul, and Faryab provinces, accounting for up to 7 million people.

As a result, despite having numerous vaccines on hand, Afghanistan has only managed to vaccinate a tiny fraction of its population. The Johns Hopkins University School of Medicine’s Coronavirus Resource Center said just 0.38 percent of Afghanistan’s population has been fully vaccinated, or 144,600 people, with 630,305 doses administered. 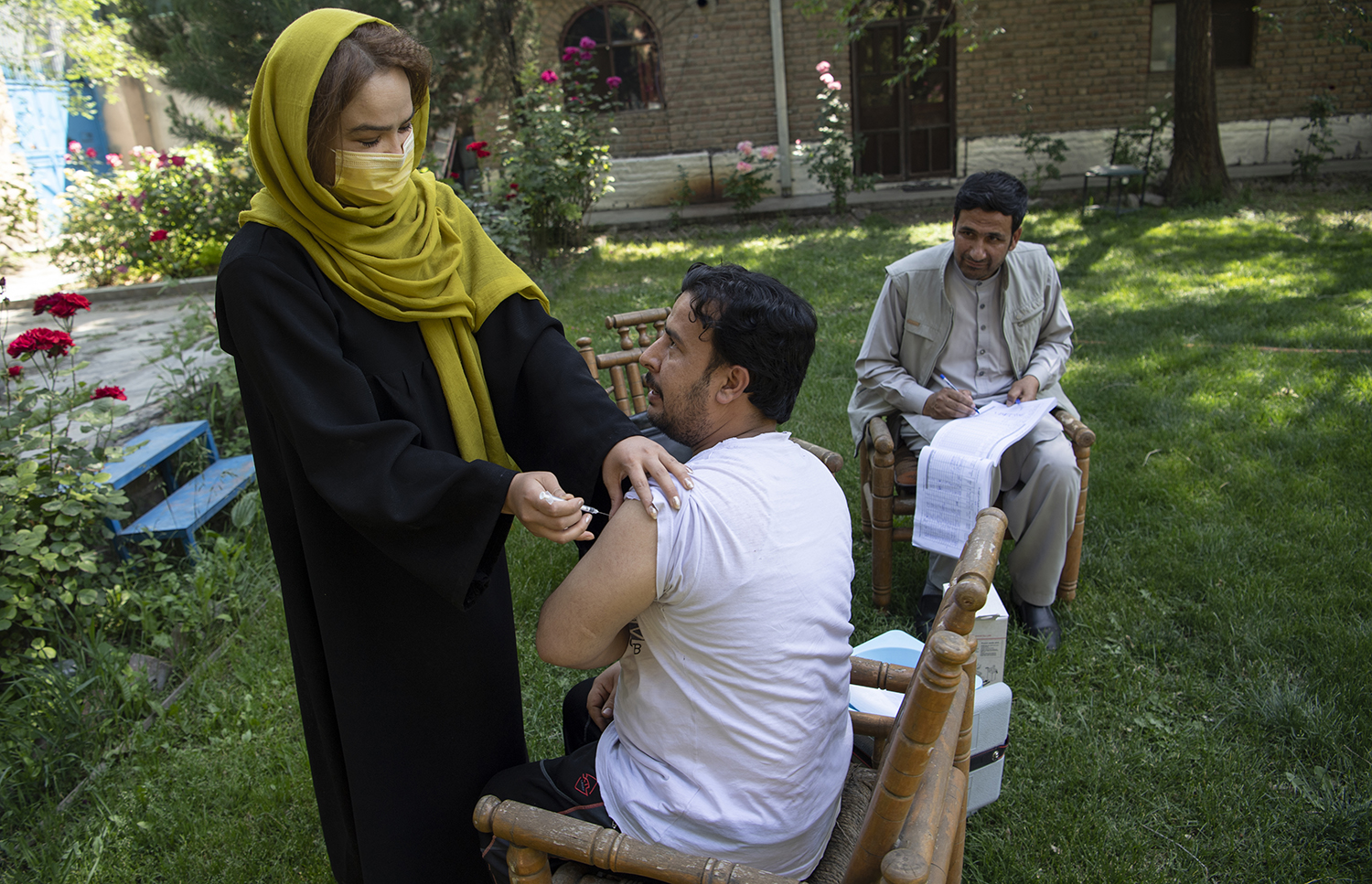 A local gardener receives his first vaccination round from an employee of Sanayee Development Organization in Kabul, Afghanistan, on May 25. MASSOUD HOSSAINI FOR FOREIGN POLICY

Most of those vaccines went to members of Afghanistan’s security forces, accounting for up to half a million first and second doses. Vaccinators are racing to administer second doses to civilians before its supply expires, leaving out many who wish to be vaccinated as the crisis grows.

The only factor Afghanistan apparently has on its side is its population’s youth: Around 70 percent of the estimated 40 million people in the country are younger than 30 years old, and more than 40 percent are younger than 15 years old. With fewer vulnerable older Afghans, that is likely to keep the overall death rate close to the global figure of 1 to 2 percent, Humayun said.

But even that is a deadly pandemic. In random conversations with Afghans, most say at least one, often more, close relatives have died of the disease. They tell anecdotal stories of hospitals and clinics being overwhelmed by patients—short of staff, expertise, equipment, and oxygen to treat COVID-19 sufferers. And it’s likely to keep getting worse. Few people in Kabul wear masks in public, and there are few signs advice against crowds is being followed. Even during last year’s lockdowns, most Afghans acknowledged it became an excuse for big get-togethers at home while still devastating the economy.

Vaccinations are so often shunned by the public—despite government promises to see most of the country vaccinated by late next year—that huge quantities have to be destroyed as they expire unused. Meanwhile, the cost of basic health equipment has skyrocketed. A simple box of masks, which a year ago cost $1 for 100 masks, now goes for about $15. Everything from simple items like thermometers to high-end gear like ventilators have apparently been diverted to the black market—all of which threatens to put the means of keeping COVID-19 in check beyond the reach of many Afghans. 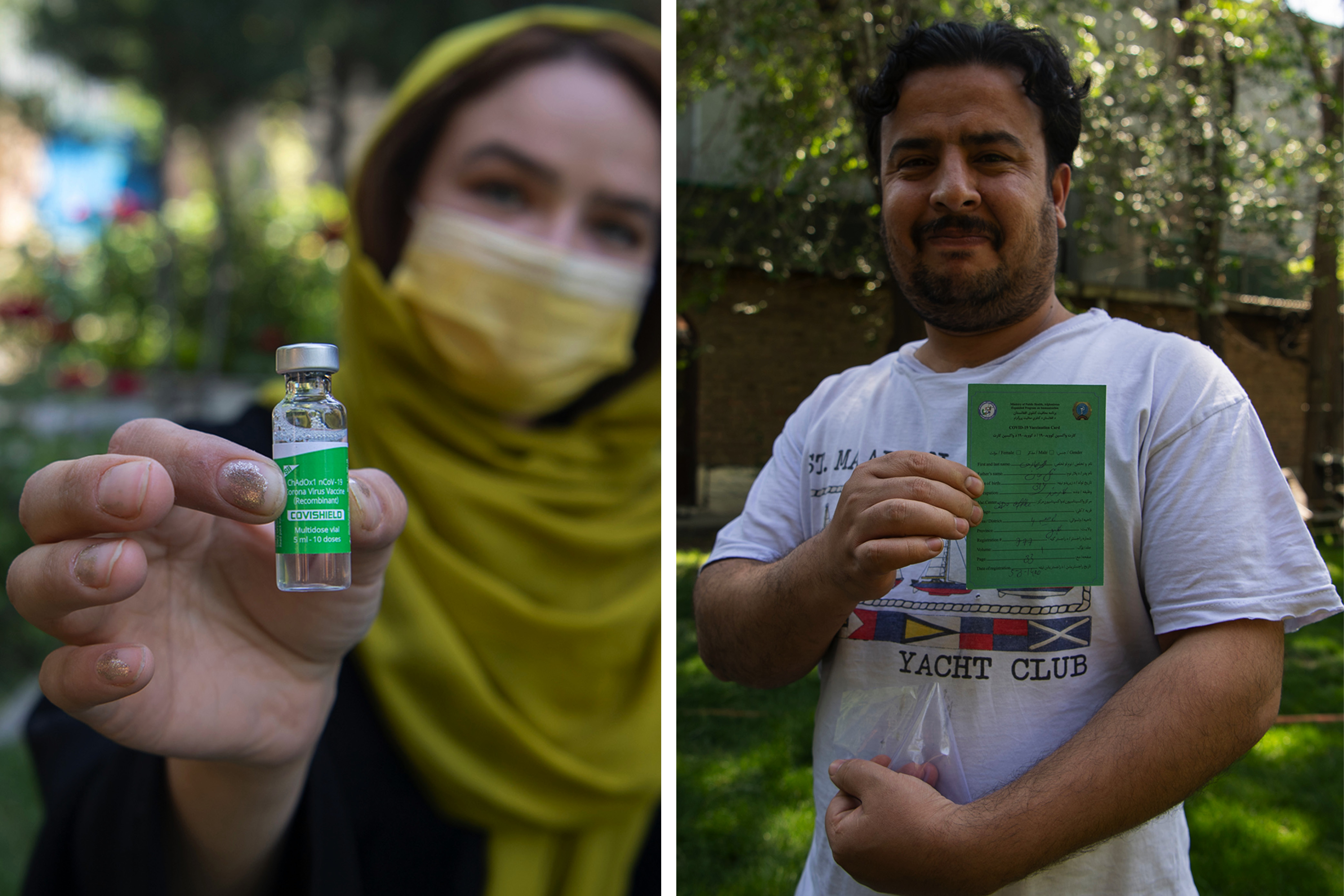 An employee of Sanayee Development Organization shows a bottle of the vaccine (left), and a gardener shows his vaccine card after his vaccination in Kabul, Afghanistan, on May 25. Massoud Hossaini for Foreign Policy

Afghanistan’s acting minister of public health, Wahid Majrooh, has implored the public to wear masks while warning of impending “disaster” amid severe oxygen shortages at hospitals across the country. As the pandemic took hold, local media reported Afghanistan had only 400 ventilators. School girls had figured out a way to make cheap versions from car parts.

The head of the health department in the northern Balkh province, Gul Ahmad Ayubi said 179 oxygen balloons went missing from the province’s main hospital amid reports local strongmen were commandeering oxygen supplies for their own use.

With the situation only expected to worsen, a businessperson in Kabul echoed many Afghan’s lack of concern as he dismissed the government’s desperate pleas for precaution. “There are worse things here that will kill you.”

Lynne O’Donnell is an Australian journalist, author, and analyst. She was the Afghanistan bureau chief for Agence France-Presse and the Associated Press between 2009 and 2017.