KABUL, Afghanistan (AP) — Four Afghan men were sentenced Wednesday to death by hanging over the filmed mob killing in downtown Kabul of a young woman falsely accused of burning the Quran, a case that horrified the country and showed the dangers women face in the conservative society.

But the family of the 27-year-old woman, a religious scholar named Farkhuna, immediately denounced the verdict as unfair as the judge dropped charges against 18 men for a lack of evidence. Judge Safiullah Mojadedi sentenced eight others to 16 years in prison. Nineteen police officers accused in the case will be sentenced Saturday, their verdicts publicly announced the next day.

One of Farkhunda’s brothers, Mujibullah, told The Associated Press that his family was angered by the court’s leniency toward the majority of the defendants.

“The outcome of the trial is not fair and we do not accept it — you saw just four people sentenced to death but everybody knows that more than 40 people were involved in martyring and burning and beating my sister,” said Mujibullah, who like many Afghans, including his sister, uses only one name.

“The whole world has seen the crime that was committed against my sister,” he added. “I am not a cleric, but the Quran says that if anyone kills another human being, then they should themselves be put to death.”

On March 19, a mob attacked Farkhunda after an amulet peddler accused her of burning a Quran after she challenged him over selling his wares to women desperate to have children. Chilling mobile phone videos recorded the horror of the last moments of Farkhunda’s life, as she was punched, kicked, beaten with wooden planks, thrown off a roof, run over by a car and ultimately set afire on the banks of Kabul River. 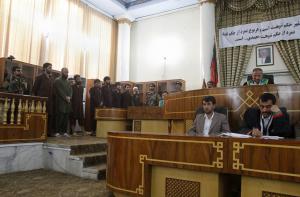 Defendants attend their trial at the Primary Court in Kabul, Afghanistan, Wednesday, May 6, 2015. Th …

An outrage followed her death, as protesters marched in Kabul, some wearing masks bearing the image of her bloodied face. Mourners held candlelight vigils in her memory, even in Washington as President Ashraf Ghani visited the U.S.

An Afghan presidential investigation later found that she had not damaged a copy of the Muslim holy book, but nevertheless, some public and religious figures said the attack would have been justified if she had in fact damaged a Quran.

The trial over her killing, which began Saturday at Afghanistan’s Primary Court, was broadcast live across the country with just two full days of hearings. On Wednesday, Farkhunda’s parents and sister looked on ashen-faced at the defendants, who included a man who threw two large rocks at her, the driver of the car that ran over her and the man who set her body alight.

Farkhunda’s parents addressed the court before the judge handed down his rulings, asking that the accused be dealt with according to the law.

“Everybody saw what happened and I insist on justice,” her mother, Bibi Hajira, said. “That’s all I want.” 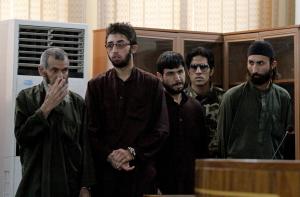 Defendants attend their trial at the Primary Court in Kabul, Afghanistan, Wednesday, May 6, 2015. An …

The defendants can appeal their sentences. The charges against them included assault, murder and encouraging others to participate in the attack. The police officers face charges of neglecting their duties and failing to prevent the attack.

Afghanistan’s judicial system long has faced criticism over its inability to provide the majority of Afghans access to justice. Women especially are sidelined, despite constitutional guarantees of equality and protection from violence, a recent report by the United Nations concluded. The attack on Farkhunda was widely seen as symptomatic of the country’s problems, where violence against women often goes unpunished.

Some conservative lawmakers in recent years have tried to dilute a law that seeks to protect women from violence. That’s sparked fears of a rollback in legislative gains that have been made for women since the extremist Taliban were overthrown by the 2001 U.S.-led invasion following the Sept. 11 attacks.

“The trial was far from perfect but it was held in open court, which definitely contributes to the strengthening of rule of law and gives the Afghan people the feeling that at the end of the day, the law does prevail,” Salaam said. 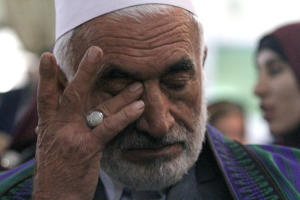 The father of a 27-year-old Afghan woman named Farkhunda, who was beaten to death by a mob, that was …

But lawmaker Farkhunda Zahra Naderi criticized the judge’s decision to separately hand down verdicts against the police officers in the case, saying such a move could foment more mistrust of the police.

“I believe that a political game is afoot and there has been political interference,” she said. “Why else would the court postpone the decisions in the case of the police?”

Meanwhile, Afghanistan still struggles with insurgent violence from the Taliban and others as the U.S. and NATO ended their combat mission in the country at the end of last year.

On Wednesday, a bus hit a roadside bomb, killing two people and wounding three in eastern Ghazni province, said Asadullah Ensafi, the province’s deputy police chief. He blamed the attack on the Taliban, who have a significant presence in the region.