Balkh province in northern Afghanistan is home to some of the most significant historical sites in the world – its ancient city was even known as the mother of all cities. More than a decade after her first visit, Lynne O’Donnell returns with a group of archaeologists, trying to uncover more of its treasures.

Across the far northern Afghan plain, a hot wind blows the dun-coloured dust into blinding clouds, and the women’s burkas into blue billows. It is 40C in the shade, and even the small black goats being herded through the sand dunes look sapped by the heat.

These are the lowlands of Balkh, where ancient trade routes attracted nomads, warriors, settlers, adventurers and evangelists, who left behind secrets that archaeologists are just beginning to unlock. This area places Afghanistan at the heart of political, economic, social and religious power across Asia, as far back as 4,000 years ago.

The last time I drove across the Bactrian plain was in 2001. I had sailed down the Amu Darya river on a barge from Uzbekistan as British and American forces were pounding the Taliban after the 9/11 attacks in the US.

I have returned 12 years later with Afghan and French archaeologists to tour some of the oldest, most magnificent and historically significant sites in the world – sites that are shedding light not only on Afghanistan’s past, but on the development of human civilisation, from India to China and beyond.

The Bactrian plain is the treasure house of Afghanistan’s secret history. Across this desert, Alexander the Great marched his army, killed the king of Balkh and married his beautiful daughter, Roxanne. Some 1,500 years later, Genghis Khan swept through and destroyed teeming cities that were melting pots of diversity.

The philosopher Zoroaster, founder of the first monotheistic religion 3,500 years ago, lived and possibly died here. Rumi, the 13th Century poet who wrote in Persian, was born in Balkh – and is also, some Afghans like to think, buried here. 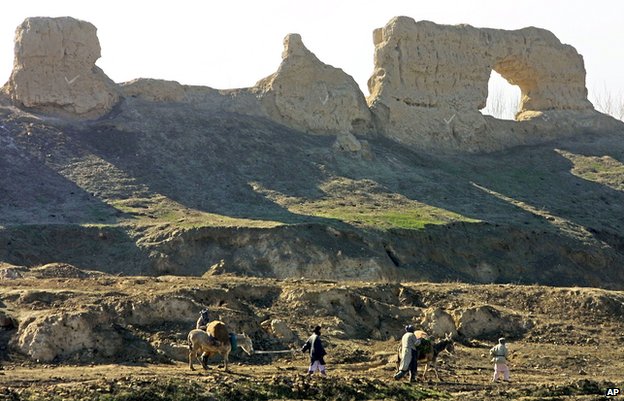 Camel trains, loaded with freshly harvested cotton, lope across the parched landscape, against a backdrop of mud walls built to stop the encroachment of the desert on the fertile Balkh oasis.

Accounts from the 7th to 12th Century describe it as a centre for religion and learning, as well as for trade, with important links to India and China

Destroyed by Genghis Khan in 1220, and again by the Turko-Mongol ruler Timur a century later

Described by explorer Marco Polo as a “noble city and great”

The French archaeologists are here to take a sample of the walls which surrounded a huge hexagonal fort, its shape only visible on satellite photos, strategically placed for both defence and water.

They dig deep in to the foundations to fill a metal pipe with dirt, so scientists in Paris can gauge the last time the quartz in the clay saw light. For now, they are guessing around 2,500 years.

Nearby in Dawlatabad is the tiny hospitable village of Zadian. We can only go with an armed police escort as the Taleban are active. Little girls in colourful scarves run squealing from the communal water pump as I raise my camera. Men in baggy trousers and turbans emerge to greet us from a shady walled garden.

I look up, and my jaw drops. Against the flawless blue sky, a sun-baked clay minaret towers over us. 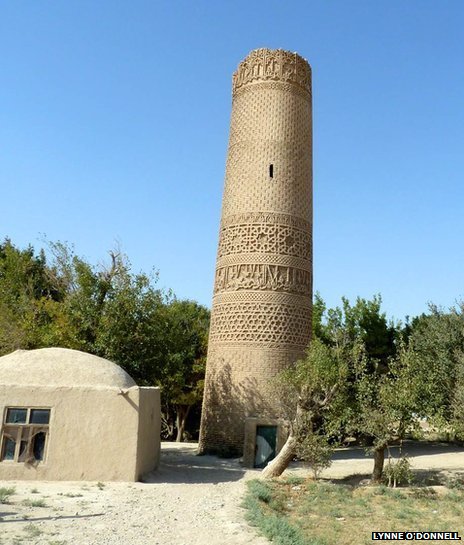 It was built in the 12th Century, still nameless, missed by Ghengis Khan and his marauding Mongols – and by most visitors to this corner of the world ever since.

In the oasis of Cheshma-e-Shifa, a huge white rock shaped like an anvil is the sole evidence of a city where Zoroastrian priests performed rituals for the thousands of people who lived here, 600 years before Christ.

On the altar’s flattened top is a well for oil which burned a perpetual flame that would have been visible across the valley. The French like to wonder if it was here that Alexander married Roxanne. 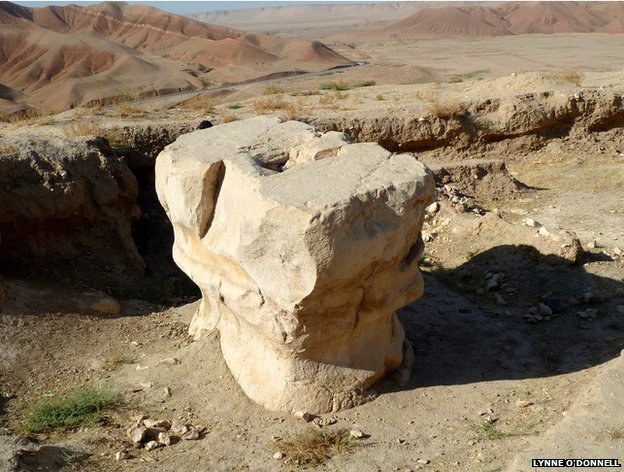 French archaeologists have worked in Balkh for almost 100 years, interrupted by wars and invasions and, in the late 1990s, by the Taliban, who believed history only began with Islam in the 7th Century. 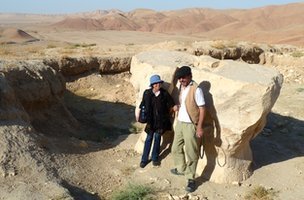 (Lynne, an archaeologist and the huge altar)

In fact, in Afghanistan, Islam displaced Buddhism. The Taliban showed their contempt for history when they destroyed the giant Buddhas of Bamiyan in 2001.

Today, archaeologists are confirming Afghanistan’s role in spreading prosperity and philosophy across a quarter of the world for thousands of years.

For them, the greatness of the past is an example for the future, and in Balkh they see not the violence of the present, but the romance of antiquity.

The original Balkh is one of the oldest cities in history. All that remains is a dusty field surrounded by monumental walls that are slowly being revealed by painstaking excavations. In seven years, about 20 metres of the foundations have been unearthed. 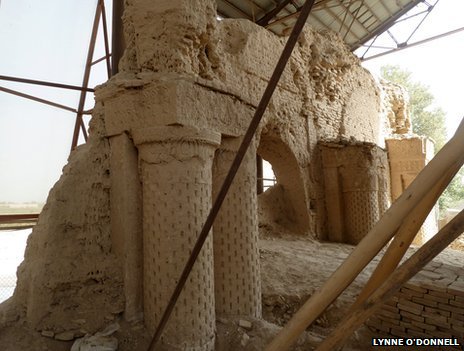 (Restoration work at the Mosque of Nine Domes in Balkh)

Visible from the top of the walls are the courtyards of the modern village. Here washing hangs, children chase dogs, donkeys pull carts, and the hot wind blows up endless clouds of dust.

In Balkh, whatever comes next when the war ends and foreign troops leave the country next year, will soon be absorbed into Afghanistan’s long history.